Things are Heating up in Seattle

We have been experiencing more extreme heat events in the Pacific Northwest, and heat waves are expected to become more frequent with climate change. In an analysis of summer temperatures in 60 of the largest U.S. cities, a report from Climate Central showed:

The University of Washington Climate Impacts Group estimates the number of days above 90°F in our region may increase by more than eight days – one of many projected changes in Pacific Northwest climate for the future years of 2041-2070. This, coupled with underlying drought conditions can have lasting effects, compromising the urban forest’s power to support microclimates, carbon cycles, efficient energy use, our culture, human security and the healing magic of nearby nature. These hot summer conditions followed by temperate winters can obscure the effects of pathogens that lead to tree decline. Locally, we can see this in effect with the decline of bigleaf maple and die-off of Western redcedar. These examples may be indicators that local populations of trees have become less adapted to their environment as climate changes.

The urban heat island effect is stronger in the more densely-populated Seattle area versus the rural environment. While conserving trees and other vegetation is absolutely part of our response to climate change threats, we currently must deal with extreme heat that boils ground-level ozone, smog and our other urban pollution. And we are facing a hard reality of hotter summer conditions mixed with smoke drifting into the city from forest fires.

We encourage everyone to take steps now to prepare for summer heat and smoke season. Know where the nearest cooling center is located and have a plan to support vulnerable family and friends. To learn more, visit: http://www.seattle.gov/mayor/wildfire-smoke.

Thank You Water and Trees

There is a dynamic interaction of the Seattle urban heat island and our proximity to the cool waters of Puget Sound and Lake Washington. Analysis of weather station data suggests water bodies have a natural cooling effect on portions of the city, contrasted with notably increased air temperatures in more densely-developed areas. So, head to these large water bodies or Seattle Parks and Recreation spray parks and pools when the city heats up.

The urban tree canopy also plays a large role in cooling our neighborhoods. Direct shading from trees can decrease temperatures by 9°F. Water evaporates from wet vegetation and trees also release water vapor through transpiration – the cumulative evapotranspiration can cool the community by another 6°F. That is a lot of relief come mid-July to mid-August when we get most of our hottest days of the year. Authors of a study in Madison, WI circulated their city by bicycles attached with heat sensors, showing that the most dramatic cooling affects come when neighborhoods exceeded 40% canopy cover. Seattle and other Puget Sound cities have canopy cover goals in the range of 30%. Data from 2016 shows that Seattle is just shy of our canopy cover goal – 28% of Seattle is covered with trees. 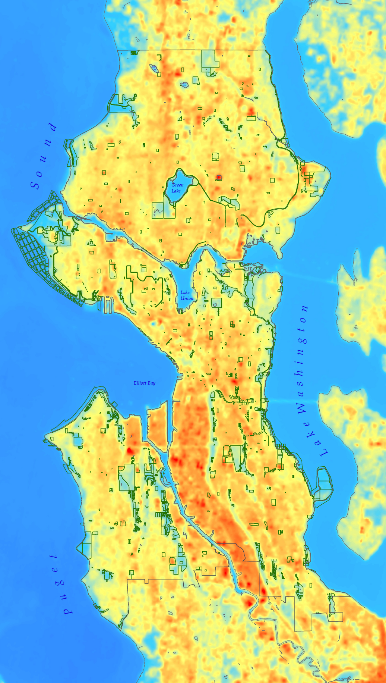 Landsat 8 thermal imagery from a hot July 6, 2014 summer day in Seattle when temperatures reached 84°F. Eyes focus on the heat islands in red that signify hotter temperatures compared against the cooler blue patches of water and vegetated areas.

Human-amplified heat from buildings, lack of vegetation, and impervious land cover mean urban residents living in Seattle and the Interstate-5 corridor may be at higher relative risk for heat-related illness during heat waves. This type of extreme heat is also projected to be a risk to human health and increasing deaths due to heat-related illness and worsening air quality.

Many people living west of the Cascades don’t own air conditioning or can’t/don’t access cooler shelter during heat events. Researchers have documented a heat-mortality relationship over a 30-year period between 1980-2010 in King County, WA – finding a 10% increase in the risk of death on 99th percentile heat days. Observations and research show that people most susceptible to hotter conditions and poor air are children, the elderly, socially-isolated people, crews working outside, folks with chronic illness and people living in urban areas impacted by heat island effects.

With the help from CAPA Strategies, the City of Seattle and King County are leading an urban heat campaign this summer. This method has been used in several other cities, including Portland and Tacoma. Volunteers will drive fifteen pre-determined routes around Puget Sound during 88°F + heat events this summer; which will give us street-level data on our region’s hottest places. The data that comes back can be integrated with other information, such as pollution hotspots, and the City’s Racial and Social Equity Composite Index (composite of race, language spoken, ethnic origin, socioeconomic disadvantage, and health disadvantage by census tract) to better locate cooling centers and prioritize investments like future tree plantings.

How You Can Help

Keeping our existing tree canopy intact, while caring for Seattle’s future forest, is the easiest way that you can take charge in combating Seattle’s rising temperatures. Take action by coming out to one of our almost-daily work parties happening in neighborhoods across the city. Find your upcoming chance to volunteer by clicking here.