In the last two-years, Seattle Parks and Recreation Urban Forestry staff have received increasing reports of dead Thuja plicata, Western redcedars, in Seattle Parks. Our arborists have also been observing more Western redcedar deaths in the last several years. I have been documenting this phenomenon and have reached out to several industry colleges for help in identifying what is the cause of this die-off. I have documented several early indicators of this Western redcedar die-off. These indicators include branch collar swelling, advantageous twig sprouting around the swollen branch collar area and individual branch die-off. In later stages the trees will die from the top of the tree downwards. 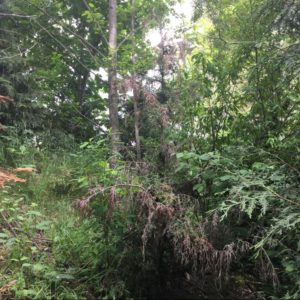 I worked with Kevin Carr and Dr. Drew Zwart from Bartlett Tree Experts, to identify several pests which are playing a role in the decline of these trees. One is wood borer named Trachykele blondeli Marseul, western cedar borer. The other is a yet to be determined bark beetle from the beetle family, Scolytidae. My determination is that these common native pests are becoming more prolific in our Western redcedars due to climate change. Recently, both Washington State University Forestry Extension and Washington Department of Resources have recently posted blog posts about mortality of our common PNW conifers due to drought stress:

Western redcedars have been a popular choice of our forest restoration volunteers for a long time. These trees are iconic to our area and loved by our local naturalists. For several years, our Urban Forestry Staff and Green Seattle Partnership staff have been observing and receiving reports of an increasing amount of dying western red cedars in our park system.

My recommendation is to limit the planting of western red cedars in our park system to lowland sites where nighttime temperatures are lowest and water is readily accessible.

In spring of 2018, I decided to start documenting dead Western redcedars to find a pattern of their decline. Once I noted a pattern, I sought help from Bartlett Tree Experts to assist me in determining why these trees are dying and what the GSP and Urban Forestry units can do preserve the health of these trees. The trees which I investigated were planted in a suitable location for Western redcedars. I did not investigate trees that were growing on slopes or were in areas that could be predisposed to experience a lack of water. I specifically looked for established trees that were growing in depressions within shady natural areas. The trees which I documented were all unexplainably declining. They were experiencing individual branch die-off at the early stages of decline. The trees all had abnormal branch collar swelling. Some trees had young branch shoots emanating from the trunk around the branch swelling.

The several older trees which I observed had large sapwood wounds around these swollen branch collar areas. There was also sporadic sap leaking on the trunks of the trees. In later stages of decline, the trees would start dying at the top of the canopy with decline progressing downward. There was some frass and insect boring holes on the trunks of the trees. I found bore galleries on the lower trunks of trees. I showed some of the pictures that I had collected to Arborist colleges, Kevin Carr and Dr. Drew Zwart. Both agreed to come and meet me to inspect several of cedars experiencing the unexplained die-off. During this investigation, we extracted an unidentified bark beetle from around a swollen branch a trunk attachment and plant pathologist, Dr. Drew Zwart found galleries from the Western cedar borer. 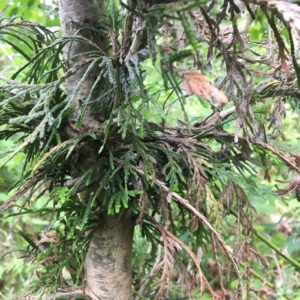 According to Dr. Zwart, both pests which we found are native to our area. These pests are well known in forestry but are not knowing to be critical to cedar health on a widespread level.  The Western cedar borer is known to infest the collar of branch attachment leading to swelling around the branch collar area. In it’s larval stage, the borers feed in the tree’s cambium which cuts off the trees ability to transfer water and nutrients throughout the tree. With extensive infestations, the borer galleries will essentially girdle the tree leading to rapid death. The bore will eventually exit the tree in its adult stage and fly to another stressed tree where the cycle will begin again. 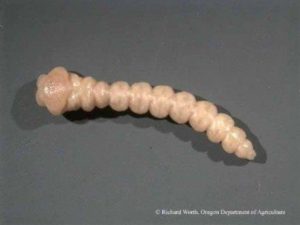 I believe that climate change has over-exerted these trees to a point where this historically non-critical pest has killed many of our western red cedars. As our region is experiencing an increase in warmer nights, our trees are not halting their respiration process and are depleting their carbon resources. This puts the trees in a state of stress. The native Western cedar borer is taking advantage of the weakened trees and infesting them to a greater level of trees then previously noted. Our smaller diameter Western redcedars are more susceptible to this infestation as they more easily girdled by borer galleries.

Our only practical option for management is to look to rely less on Western redcedar as a planting option. 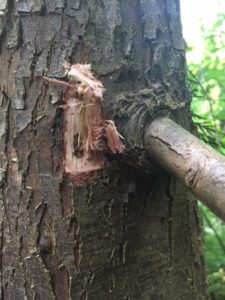 P.S. I am seeing a rise in the amount and severity of a wood decay organism called Perennidporia subacida or Stringy butt rot. Below is a photo of this organism to help with identification. I would note that to identify it, one would look for a white organism pressed up against the tree in between fissures in the trunks bark. This organism would be all white when immature and would have a brown center with white outline once it becomes mature. This is a slow-moving organism, which only grows a centimeter a year, but it can cause tree failure, die-back or death over a long period of time. 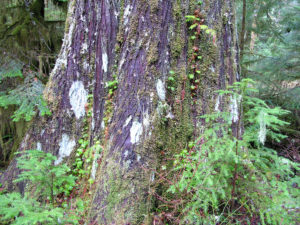 Perrenniporia subacida, a white organism flush with the lower trunk of trees

Branch collar: The often-visible swelling in a woody plant that forms at the base of a branch where it is attached to its parent branch or to the tree’s trunk

Sapwood: Outer wood (xylem) that is an active longitudinal transport of water and minerals

Cambium: Thin layer(s) of meristematic cells that give rise (outward) to the phloem and (inward) to the xylem, increasing stem and root diameter

Respiration: A chemical reaction by which plant cells stay alive. Through respiration, plants use oxygen and produce carbon dioxide. The result is the release of stored energy for use.