There aren’t poems about Seattle’s dry summers. A week of cloudless, bright blue skies are as predictable and needed as the rain, as vital to growth. But Seattle has always been hesitant to claim that brightness, and outsiders love to ask us how we stand all that rain. So, what do we do when the dry summers claim a larger stake of our climate, when temperatures rise enough to push us into a new Plant Hardiness zone? Although dry summer weather is normal and is not cause for alarm, continuing to monitor climate change data in our region is a must. As we hope for ongoing recovery from the 2015 drought, there are a few things we can do to set up new plantings for success.

The causes behind drought, climate change, and typical Seattle summers are different, but all necessitate similar actions to protect native plants in Seattle natural areas and backyards. Recognizing symptoms of drought and taking appropriate precautions can protect the health of nearby nature spaces.

Symptoms usually progress from the top of a tree down and from the outside in. The Northwest Natural Resource Group provides guidance in recognizing and responding to drought. Saplings, or trees between 1-3 years of age, are especially vulnerable, and they require special attention due to competition stress and the vulnerability that comes with not having a strongly established root system.

Native plants commonly respond to drought by dropping their leaves. Drought stress in deciduous tree plantings are the most iconic, recognized by wilting, brown or curled leaves.

Conifers do not wilt like hardwoods, but may drop all needles except the needles that grew this year and last year, or second-year needles may turn yellow or red prematurely. Weak trees are more susceptible to bark beetles, and in severe cases conifer limbs and canopy will die off.

For saplings that struggled but survived through Summer 2015, diameter growth will likely be slower than usual in 2016 and possibly 2017. If drier summers continue, it may become difficult to determine whether some trees are dormant or dead. More information on tree health can be found through Northwest Natural Resource Group.

Forest Stewardship Notes, a joint effort by Washington State University Extension and the DNR Small Forest Landowner Office, offers advice on seedlings, pruning and watering during drought. If broadleaf evergreen plants like rhododendrons, salal, ferns, or evergreen huckleberry are wilting, they advise not to water. These native plants have a hearty self-defense system, and watering may disrupt their cycle. With that said, heavily mulching around newly planted natives is key to retaining moisture. 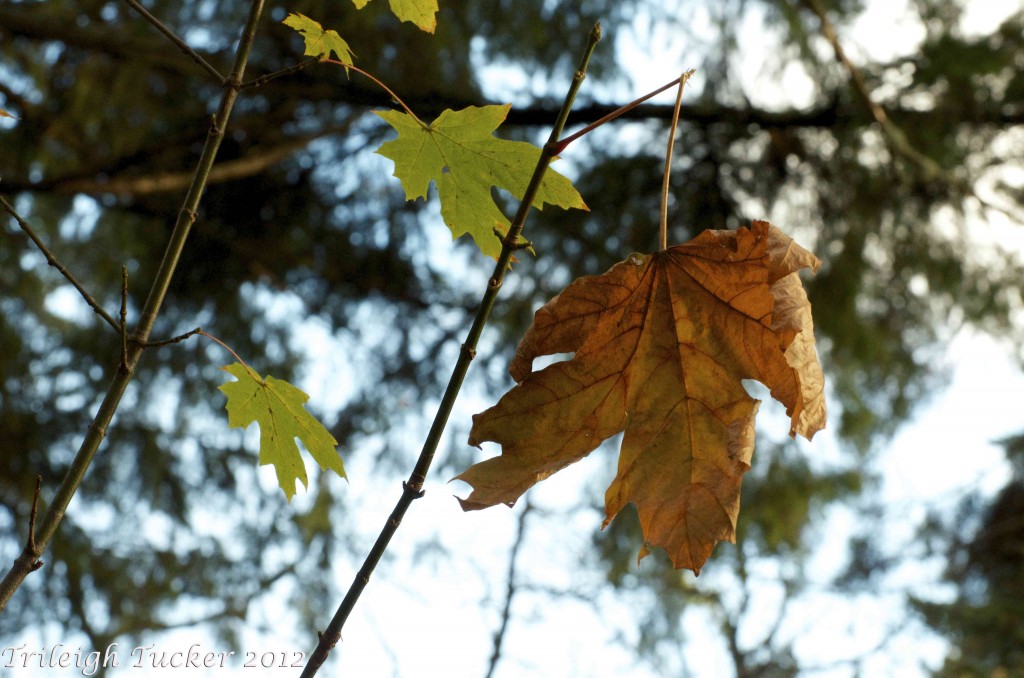 “Rain is our mascot. You know, like ‘The city that never sleeps,’ or ‘What happens here stays here’ for Las Vegas. Statistically, there’s more rain yearly in New York City, but no one knows that. Rain is our identity.”- David Laskin

Last summer, in response to drought conditions, the City of Seattle and other cities around Puget Sound, initiated a Water Shortage Contingency Plan. Among other resources and actions, cisterns (each about 1000-gallon capacity) are in place around the city for volunteers to water new plantings. These are temporary, manually-operated systems at sites within Cheasty Greenspace, Discovery Park, East Duwamish, Interlaken Park, Deadhorse Canyon, Me-Kwa-Mooks, NE and SW Queen Anne Greenbelt, Seward Park, and the West Duwamish Greenbelt. Stewards at five additional parks are accessing valves from the local irrigation system, and several other sites are watered by contracted companies with water trucks. In the future, other actions to respond to a changing climate may include a shift in planting palettes within Seattle parks, expanded use of irrigation for establishing newly installed plants, and increased monitoring and reporting.

“The richness of the rain made me feel safe and protected; I have always considered the rain to be healing—a blanket—the comfort of a friend. Without at least some rain in any given day, or at least a cloud or two on the horizon, I feel overwhelmed by the information of sunlight and yearn for the vital, muffling gift of falling water.”- Douglas Copeland

What can be done to care for plants during the dry, summer season?

– If available, water around saplings and other appropriate plantings. Stewards can contact their Parks ecologist about water options.

– A thick layer of mulch helps soil retain moisture and regulates soil temperature, and holds on to any water throughout the dry months. According to the Forest Steward Field Guide for Green Seattle volunteers, optimal mulch is two 5 gallon buckets of mulch/plant. Place mulch 4-6” deep and at least 4” away from the base of trees. Check out this mulch research.

– Make note of planting bed edges that get especially beat by summer sun. Double down on protecting those areas.

– Make informed plant selections. Plan a walk through of the site this fall before planting to assess which native plants are doing well after the dry season and to guide future plans.

– Timing of planting is crucial. In the Pacific Northwest, the planting season is in the fall and winter rather than the spring. Plenty of rainfall and temperate weather conditions from October through January nourishes and strengthens newly established roots.