Stewardship motivations, from the local to global

Community leaders locally, nationally and abroad are interested in learning and supporting stewardship motivations. Over the past year, Green Seattle has heard from some of the most active volunteers on what can make the stewardship experience with the Green Seattle Partnership the best it can be.

Elizabeth Housley, your guest writer here, is a Forest Steward at St. Mark’s Greenbelt and a Washington Native Plant Society representative. In my professional plant-related life, I am often asked this exact question from the Forest Steward Survey:

“How did you find out about the Forest Steward program?”

Here is some of what can be learned from the Forest Steward responses:

In the survey, most reported that a partner organization or Parks staff member led them to the program (48%). Almost 20% said they attended a work party as a new volunteer and then became more involved. For me, the question usually comes from new volunteers that show up at a work party, or from a colleague at a meeting or professional connection. People from all backgrounds are curious how this impressive group of citizens come together, and how they figure out all the complex needs a forest may require. Are stewards formally trained, or is there an application process? I usually answer with a pun: “It’s an organic process”.

Since about 2013 (when I became a Steward), I’ve met nearly 150 Forest Stewards through trainings and events. What I have come to see among my peers is a wide range of knowledge and an undeniable passion and desire. Most people who come to be “Forest Stewards” are frequent volunteers in a park near their house, and a Seattle Parks ecologist or fellow volunteer directs them to resources and connections found through the Green Seattle Partnership. Most Stewards are not new to the field. Most have had at least a year of hands-on work, and they are long time scholars or recent graduates in an ecological field. A handful of the newest Stewards have stepped in with a lot of interest but little experience. As a group, we are an impressive bunch. 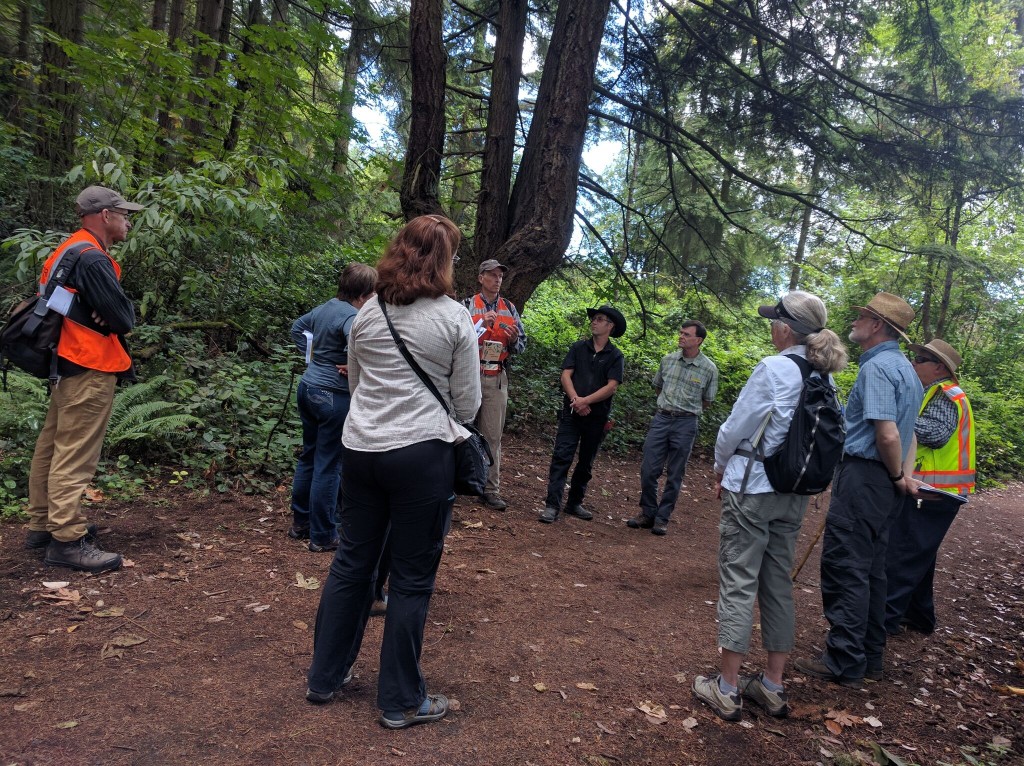 Survey Question: “What attracted you to become a Forest Steward?”

Most stewards selected two or all three of the available answers: “Hands on Restoration Work”, “Community Building”, and “Planning and Organization”. For these respondents, all three choices may be equal motivators. The majority were attracted by the opportunity for hands-on work but added additional reasons in the open-ended response section. Perhaps not surprisingly, many wrote they were already undertaking restoration work in a natural area before the Green Seattle Partnership existed. Others say they wanted to be a part of a solution to combat the increasing multitude of threats to our environment. A book, “Bringing Nature Home”, inspired one respondent to take action and invite wildlife and native plants into their nearby nature space. Others share how their childhood and experience shape their answer:

“Concern for the environment and an opportunity to take concrete action to slow environmental degradation [are my motivations]. I grew up in the woods and activities in the natural environment have always been a central focus of my life.”

“[Of the choices] work in the woods is my favorite, but I had to do all those other things to make the project successful.”

Survey Question: “What if anything, made you hesitant to become a Forest Steward?”

This was an open ended question. Out of 37 responses, eight reported no hesitation. Most Stewards reported hesitancy because of too many requirements, ‘bureaucracy’, or paperwork. Others express not having enough time to commit, or not enough plant and restoration knowledge. Another consistent response was the difficulty in managing the project alone and not having a good Steward team to spread the workload. A few responses are interesting in their complexity:

“I was afraid I would be alone in it: as it happens, my husband took to this much more enthusiastically than I anticipated, and it has been good together time for us.”

These opening survey questions hint at a larger question that cannot be answered in an informal survey. How are Green Seattle Forest Stewards situated within our city’s stewardship culture? Within the nation and world? Several recent publications situate Green Seattle within the stewardship movement, from the local to global.

A Seattle-wide context is from a 2012 article produced through the Green Cities Research Alliance. A set of researchers conducted lengthy interviews with 9 leaders representing a range of not-for-profit organizations from small volunteer-based outfits to large land conservancies. The interviewees served in a leadership capacity but all had background and history in getting their hands dirty. 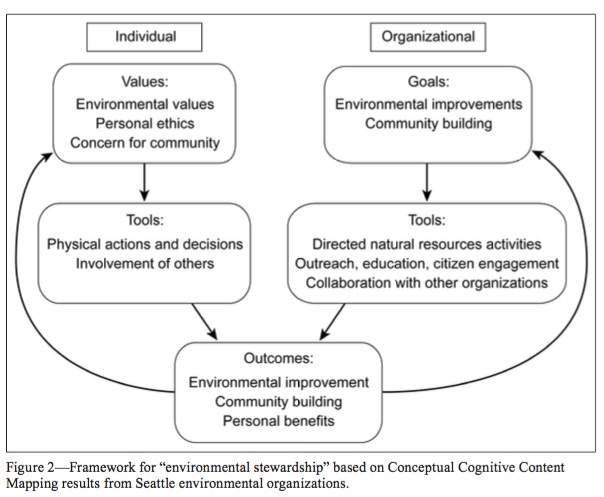 Interviewees answered the question “What is environmental stewardship?” using note cards to brainstorm and write ideas, phrases, or terms (the article has a detailed overview of this cognitive mapping process). The interview participants conceptualized stewardship at two social scales, the individual level and the organizational level. Participants “generally described individual motivations for stewardship involvement as being more value-based. Specifically, values included environmental ethics, personal ethics, and concern for community (p.24).” The interviews revealed how individuals apply their stewardship values through direct behaviors, actions, and decisions. Bringing other people into stewardship was an important component. “When acting on values, outcomes such as environmental improvement and community building, in addition to personal benefits such as meaning or realization of passion, can be met. Positive outcomes can affirm, then strengthen initial motivations (p.24).” While the individual values motivating stewardship may not be surprising to those of us who undertake it, this publication provides evidence of the social dimension underlying and supporting environmental restoration goals.

Jumping up in scale, how does contemporary stewardship exist nationally and globally?

In the U.S., stewardship tends to exist within ‘green infrastructure initiatives’, themselves a component of urban renewal projects across cities and communities with broad social, economic, and environmental purposes. In the U.S., although programs are typically organized from the top-down, recent research suggests “digging in the dirt can be a viable way of getting people involved in the practice of democracy”. A strong collection of literature exists on the individual values and meanings within U.S. environmental stewardship.

Globally, urban ‘greening’ projects typically address human impact on the land and need for access to nearby nature, sometimes focusing on resource use rather than public green space access. Some analogous programs to Green Seattle are organized bottom-up with an emphasis on direct local needs such as job training, food production or water conservation. Volunteer-based, ecological restoration is often not the main goal. For example, ‘green job’ programs in several African cities, western India, and British Columbia were developed as creative responses to political, social or infrastructure disenfranchisement. Such grassroots programs focus on serving low-income or disadvantaged populations. Stewards within these programs report broader motivations to undertake stewardship, often with direct personal goals such as job training or providing food for family members.

At all these scales, it is apparent stewardship describes the ancient struggle to co-exist with the life forms around us.

We have a long history of mistakes, but also of habitat healing. This weekend as you work in your garden or pull blackberry in a park, consider your role and motivations within stewardship, locally and globally.