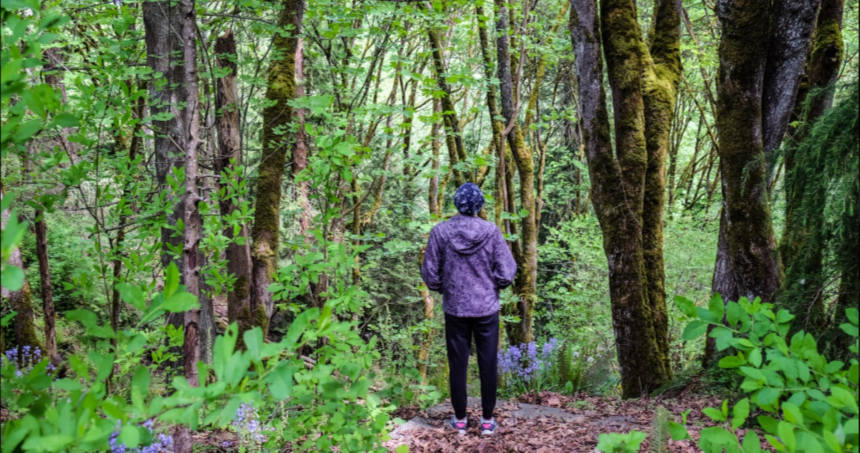 Has this ever happened to you? You’re working at your restoration site, pulling holly seedlings or digging out blackberry root balls and making great progress, feeling good, you’re in the zone! You take a breather, grab your water bottle to take a drink and as you raise your head from looking down at the ground you see it. Maybe 30 feet in front of you just beyond the property boundary. Rearing up like a green monster, a massive English holly tree covered in red berries. It’s not on your site or on the property you’re working on but it’s definitely impacting your site and that adjacent property. If you could only do something to get rid of those pesky invasive plants that are bordering your site and seem to be constantly creeping back in! 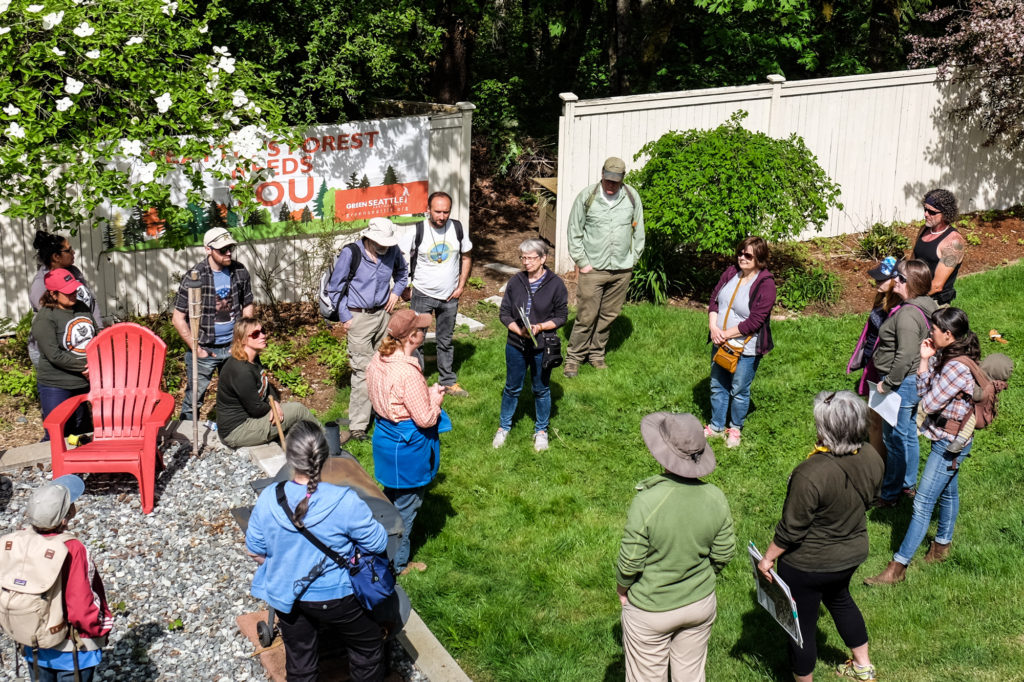 Invasive species don’t recognize property boundaries. And for that matter, neither do our urban forests. That’s why in 2017, City of Seattle Parks and Recreation, the Green Seattle Partnership, and King Conservation District launched a pilot project to complete forest restoration in several “backyards” of private parcels that border active Green Seattle Partnership park restoration sites. The goal of this pilot project was to improve the resiliency of park restoration sites bordered by the private parcels and improve the forest habitat value of the private parcels while meeting the goals of residents. We also wanted to use this pilot project to determine the resources needed to complete such projects, what works well, what barriers exist and develop new resources for residents interested in doing backyard forest restoration. 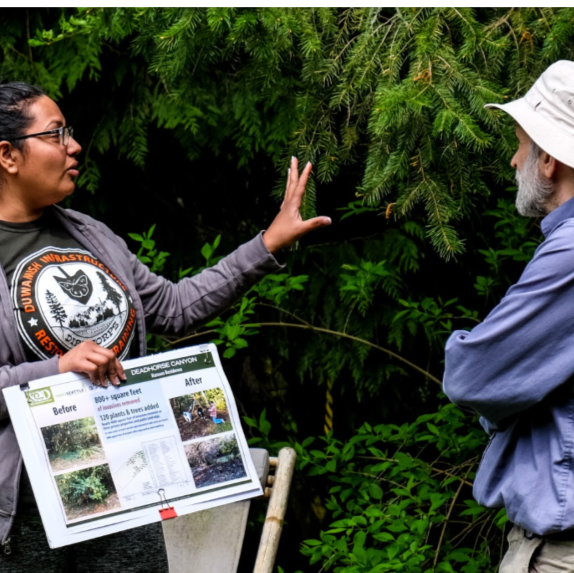 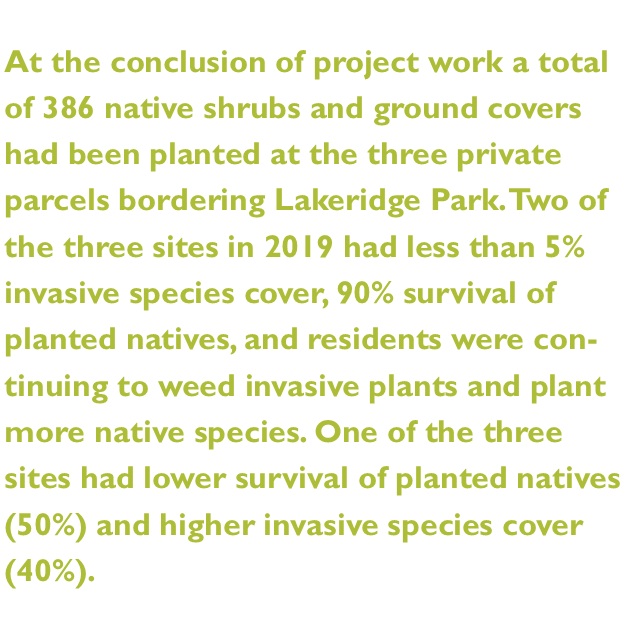 Take-aways From our Pilot Project

We learned from these three backyard projects that these types of restoration projects can be successful but there are several important factors that affect success and several significant barriers for residents and cities wanting to do these types of restoration projects. The most important factor we found to success was sustained commitment and engagement by the private parcel resident. When residents stay interested, engaged, and committed to implementing and maintaining restoration projects like these there is a high chance of success. When this is missing from a resident then risk of restoration failure is much higher. A second important factor for success we determined was having available technical assistance support from a knowledgeable restoration practitioner that the resident trusts. We found that having this resource available to residents on our pilot project helped keep them motivated, built their confidence in their own restoration skills and abilities, and helped them navigate any complex problems that arose before they gave up. 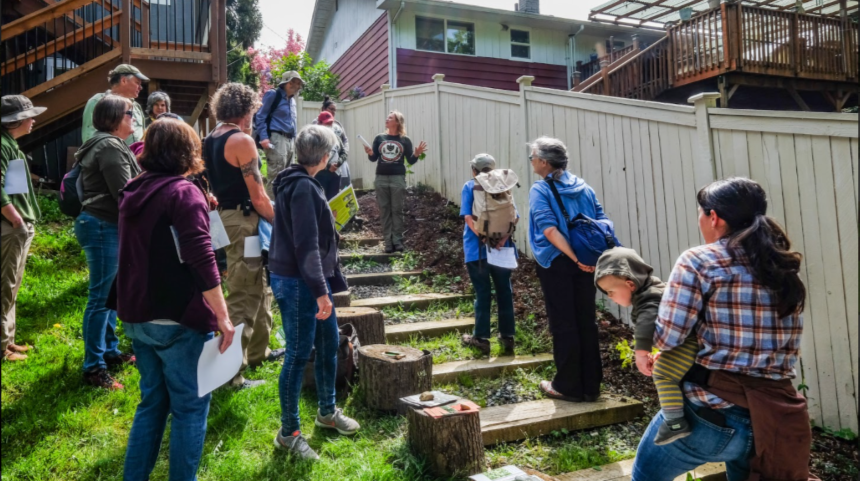 In addition to these two important factors for project success we also identified two significant barriers that private parcel residents may encounter with these types of projects: challenging physical site conditions and city permitting. In many urban cities, like Seattle, forested open spaces and the private parcels surrounding them are often centered around landscape features such as ravines, steep slopes, streams, or wetlands. The physical conditions of these features often require professional expertise to safely and effectively complete ecological restoration work. Restoration projects on private parcels on or adjacent to such landscape features also often require a resident to go through a city permitting process to legally implement significant invasive species removal or control. This is a process that for many people is confusing, time consuming, and adds additional costs to a restoration project in the form of permit fees.

In an effort to support residents, especially those that border forested parks and open spaces, interested in stewarding their piece of Seattle’s Urban Forest or restoring forested habitat on their property our project partners developed a Backyard Forest Stewardship Guide. This guide introduces important topics related to forest stewardship and connects residents with existing resources that can help them start restoring and protecting the forested habitat on or adjacent to their property. As a Green Seattle Partnership Forest Steward myself, I’m excited to have this new guide available as another tool to engage with the community that lives around my restoration site and with volunteers. Beyond this pilot project King Conservation District anticipates working with Green Seattle Partnership and the City of Seattle on future forest stewardship projects that build on the successes and apply the lessons learned from this pilot project.

We hope you find this guide helpful, and feel inspired to begin restoring your private property. We are here to answer any questions you may have – info@greenseattle.org

A massive thank you to Deb Sladek Photography for the amazing photos used in this blog post. You can see more of his work at her website, www.debsladek.com.