Each year Green Seattle Partnership staff and volunteers are working hard to restore forested parklands across the city.  We are always on the lookout for better ways to get the work done.  It could be a new tool, a new way to deal with weed debris, or remove a specific invasive plant.  Our volunteers up at Carkeek Park have been trying out different ways to protect plantings from the mountain beavers that call this park home.  These little critters love to eat baby trees and tender shoots, which makes it hard to keep our forest restoration on track.  Read below to see what has been tried and what is working to help minimize mountain beaver damage at the park. 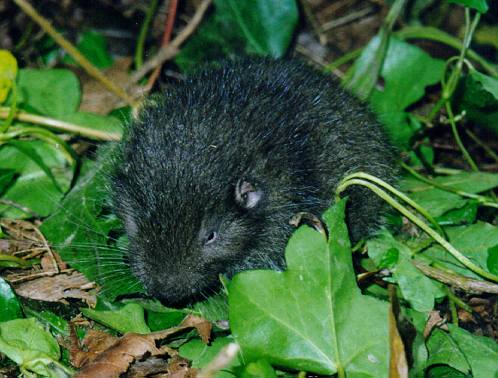 Carkeek Park has an exceptionally high population of mountain beavers (MB). For years, forest restoration efforts have had to contend with MB damaging planted seedlings; naturally regenerated seedlings are rare, presumably because of foraging MBs. Damage up to 100% is caused by: plants being pulled out entirely, the top shoot or stem being cut at a characteristic diagonal angle and ‘harvested’, and side branches being cut off (a MB can climb up to 7 feet in a sapling tree). Efforts to minimize damage have been unsuccessful until recently; the most recent effort has been putting wire cages around plants and this seems to at least limit damage.

Efforts in the previous 6-10 years focused on putting ‘sleeves’ around the seedlings, either ‘netted sleeves’ or ‘blue tubes’. Netted sleeves didn’t work because a MB can climb up and push over the sleeve and plant, or wiggle under the sleeve to reach the base of the seedling. Blue tubes did not work for several reasons: (1) a MB can get in, and (2) plant mortality is high because of poor ventilation inside the tube and seedlings getting moldy. Some other failed efforts entailed using plastic container lids around the stem, cutup beer cans, and upturned containers. A volunteer suggested trying a chicken-wire cage. At first that seemed to work, but the type of wire still provided MBs with a foothold for climbing up and chewing off the leader.

Finally heavy-duty fencing material was tried. In 2014 Michael Yadrick of Seattle Department of Parks and Recreation supplied Carkeek Park volunteers with several 50-foot by 3-foot wire rolls. Openings in the wire are 2” by 4”. The 2” width of the opening prevents most MBs from pushing through, and the 4” height of the opening makes it difficult for the MB to climb up to the top of the cage. Volunteers cut rolls of fencing wire into sections of 28”. When bent into a cage-shape the diameter of the cage is ± 9”. For larger seedlings bigger cages can be made. The bottom horizontal wire was removed so that there were spikes which could be pushed into the ground. Also, each piece was cut so that there were spikes along one side which are used to bend and secure the sides of a cage together. This results in each section having a row of 4″ long spikes at the bottom and 2″ long spikes at one side. The long spikes serve to “nail” the cage into the soil, the short spikes serve to hold the wire section together after it is bent into a tube shape.

It took 3 volunteers working in unison on one 50-foot roll about one hour to cut cages. It was extremely helpful to work on two picnic tables set end-to-end to create a long work surface where the wire roll could be laid out and weighted with heavy objects while each volunteer worked with a set of wire cutters.

Installing cages significantly increases the work involved with planting. Volunteers must carry cages and stakes to a planting site along with the plants. This work can be tiring and frustrating when slopes and thick underbrush are encountered getting to the planting site. However, volunteers seem willing to do this because the outcome is that their planting efforts may have a higher probability of success. An efficient method for carrying cages is to bundle them into stacks of five and then bend them in half.

After initially working with wooden stakes and zip ties, we started using fiberglass rods instead. Rods are lighter, less bulky and zip ties are not needed because the rod can be weaved through the openings.

Cages are installed after planting the seedling. Surrounding a plant with a cage is best done by two volunteers rather than solo. To get a cage to remain vertical on a steep slope, a moat is needed around the uphill side of the plant.

Depending on the soil, the bottom of the cage and the supporting stake/rod can be difficult to secure. A tool for pounding the stake/rod into the ground may be needed. However, it is not always necessary to use stakes to secure cages. If the ground is soft, the spikes can be pushed into the ground thus anchoring the cage.

If the plant has long side branches, then the volunteer must decide whether to bend the branches to fit within the cage or to let them stick though the cage openings. To minimize bending branches, volunteers began increasing the cages from 28-inch sections to 32-inch sections when the second 50-foot wire roll was cut. For some plants, two cages were combined to make one large cage. The crew found it advantageous to place flagging on the cages rather than on the plants. This allows the flagging to be at a consistent height regardless of plant size, and be more visible.

As of August 2017, the only cages removed have been around plants which have died. Since volunteers have caged plants for only two years, the following options on cage removal are suggested but have not been tried.

It has been difficult to assess how well the cages work as a deterrent to mountain beaver damage. Of the cages volunteers have installed (approximately 150), there are three in which the plants have nevertheless sustained damages by mountain beaver. Damage has been to the leader and to side branches which stuck out of the cage. All the damage noticed so far appears to have been done by mountain beaver climbing a cage as opposed to digging under a cage or climbing through an opening in a cage. The current conclusion is that although cages do not stop all damage, damage which is done is much less significant than damage to unprotected plants.

An ancillary benefit of using cages is the visibility of plantings. Cages are not very visible from a distance making them unobtrusive to the casual park visitor, yet when stewards are trying to locate a plant for continued care, cages make locating plants easier. Volunteers have flagged the cages rather than flagging the plants; this allows the flagging to be at a consistent height regardless of plant size.

If you are interested in reading Loren’s full article on Mountain Beaver Protection you can read it here.  If you want to get out to Carkeek Park to volunteer with Loren and his group, head on over to our events calendar and search for Carkeek Park.