The Seahawks aren’t the only Hawks in Seattle

Ed Deal, from the Seattle Cooper’s Hawk Project, has had a busy year of monitoring our resident population of Cooper’s Hawks. He and his dedicated team of volunteers made over 700 sight visits this year to increase our understanding of Cooper’s Hawk nesting in Seattle.  Before reading his 2018 report below, you can find an interview with him from last year, in addition to the 2017 report here. 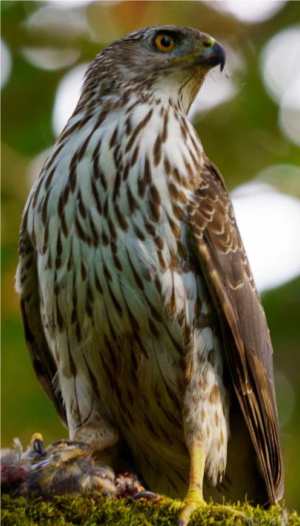 Once again, a crazy-busy Cooper’s Hawk season has ended, and 4:30 AM alarms have been replaced by leisurely mornings with coffee and the newspaper. In the past eight months I made over 700 site visits, with over 400 more from our growing team of volunteer observers. The 2018 season totals: 46 nest-building pairs, 41 incubating pairs, 40 nests with hatching, 40 pairs with fledged young, and 145 fledglings. Nesting density continues to increase: one nest per 1.8 mi2 this year, compared to one nest per 3.0 mi2 in 2013. The most popular nest tree species were again Big Leaf Maple (12), Douglas Fir (10), White Pine (8), Alder (5), Sycamore (3), and Madrona, Hemlock, Norway Spruce, Deodar Cedar, Atlas Cedar, and Oak (1 each). Despite untold frustrating hours, collaborator Martin Muller and I color-banded only 17 juveniles and 2 adults, compared to 20 juveniles and 5 adults in 2017 by Martin alone. In better news, we have color-banded 228 birds since 2012, with 198 subsequent band sightings on 89 individual birds, an excellent return rate of almost 40%. 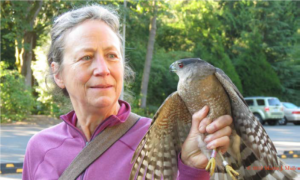 Professionals in the Field

In November 2017, I attended the annual international Raptor Research meeting in Salt Lake City, a wonderful opportunity to network with other researchers, see the great “elders” in the field, and hear presentations on birds of prey. In July 2018, I spent an invigorating half-day trapping and banding with two great raptor biologists, Brian Millsap and Jeep Pagel, who study the dense Cooper’s Hawk population in Albuquerque, NM. This year they are monitoring 89 nests in 26 mi2 (3.4 nests/mi2), a density many times that of Seattle. Of course, given our vast study site, we may be missing a few nests… I also got another lesson in attaching radio transmitters to Cooper’s Hawks, something we hope to do in Seattle someday. Over the year I gave nine talks on the Cooper’s Hawk Project: six Audubon chapters, the citizen-science symposium at Puget Sound Birdfest in Edmonds, a class at the University of Washington, and the annual conference of the Washington Falconers Association in Moses Lake. Martin and I also hosted two UW classes on biology field methods at Cooper’s Hawk nest sites, giving students an opportunity to practice observation and measurement skills on nest trees and territories. I’ll also give talks in 2019 at the Seattle Audubon Master Birder class (April 29) and Spokane Audubon (May 9). 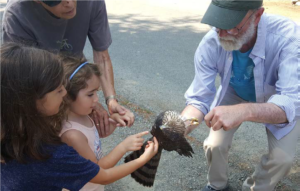 I’m excited about the recent publication of two books on raptors: Urban Raptors, edited by Clint Boal & Cheryl Dykstra (Island Press), where I am honored to be a coauthor on the chapter on Peregrine Falcons, and The Cooper’s Hawk, by Bob Rosenfield (Hancock House). Breaking news: Martin Muller, Patti Loesche, and I took the big step of forming a nonprofit corporation, Urban Raptor Conservancy. We have just received official 501(c)(3) status! With PAWS Wildlife Center, our first research goal is to document the occurrence of anticoagulant rodenticides (blood-thinning rat poisons) in urban raptors, at a cost of about $20,000. PAWS staff is donating their time and are already collecting samples. We are grant writing and fundraising to pay for the cost of toxicology testing. Here’s a recent TV spot on our study: https://www.kiro7.com/news/local/rat-poison-is-suspected-in-deaths-of-washington-raptors/858561694 Thanks to our superb volunteers for another exciting and productive season, and thank you all for your interest, hospitality, and reports on sightings. Spring nesting surveys start in March 2019. See you then!

Click here for more information about Cooper’s Hawks and their behavior.